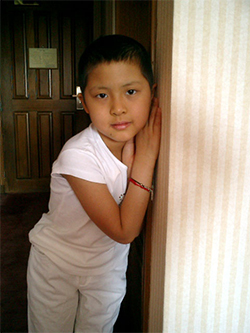 In the past 7.5 years, my wife and I were blessed with a very special child, Chelsea. Chelsea had, through all these years, given us enormous joy and laughter.

She had touched the hearts, not just of my wife and myself, but almost everyone that came into contact with her.

In the early days when she was diagnosed of cancer, she would always ask “Why do I have this disease?” My wife and I did not have a direct answer and could only reply “Because you are so special!” Now, we believe and know this is the right answer.

She had many attributes:

Courage and Pain Tolerance
She had made many friends in the hospitals and was always proactive in playing and following instructions from doctors and nurses. She was the proud and joy of every medical staff associated with her, both in England and in Hong Kong. The only time of frustration or annoyance was when occasional trainee medical staff took several attempts in placing a needle in her hand, which caused undue and unwelcome pain.

After each of the 2 major operations, the knee replacement and the hip disarticulation (amputation), she was able to jump out of the hospital bed and tried walking within a week.

Fighting spirit
On finding out local reoccurrence in her leg after the first major operation and then lung metastasis after the second major operation, she had not lost hope and kept on telling us she would not give up. She even comforted us when she sensed our worries. To her, Life is very precious.

Consideration and Caring for others
She always thought of and pleased others before herself. She would put on her artificial leg (even though it’s terribly uncomfortable), because it would please Daddy from the uncomfortable or prejudice looking eyes around the street.

She would also ensure the nurses and trainee doctors were at ease in their job. Whenever an injection or change dressing didn’t go too smoothly, she would say “It’s alright, I’m used to it….” Afterwards, she would tell Mum and Dad or Auntie that it did hurt. There would always be a “thank you” when given something or when nurses cleaned her Hickman’s line (a tube inserted into her chest for nearly year and half).

2 days before she passed away, Chelsea was in dreadful pain and didn’t get any sleep. During that early morning when Aunties (having just returned from England and was staying overnight with us) couldn’t sleep and went up to see how she was, Chelsea, almost breathless, said “ Auntie, do get some sleep, you’ll be suffering from jet-lag, I’m OK….” It’s difficult for an adult to consider others in time of their own suffering and yet for a little girl of seven…

Awareness in control
Throughout the year and a half of painful treatment, she managed the whole saga by requesting to know every steps and stages of the treatments and faced it head on. She didn’t like painful surprises.

Love and kind
She adored babies and younger children. In parties, she would ensure the younger ones would get their cakes or toys, in fact, she would ensure the older ones get theirs too. In our recent visit to England, she had packed presents and homework exercise for her little four years old cousin ensuring he’ll be happy and learn properly.

Faith in Jesus
No matter where she was, she would pray to Jesus each night and seek comfort in Him for a cure and to make the pain disappear, and often, she would pray not for herself but for other children in the hospital ward.

My wife and I are extremely proud to have such a brave young girl as a daughter. I truly hope those of you who had contacted her would always remember her and her spirit. We’ll miss her lovely smile and her sweet voice. I have to say loosing her really, really hurts inside, but we know she is now in a very, very happy place and forever in peace