I Want To Meet "Twins" 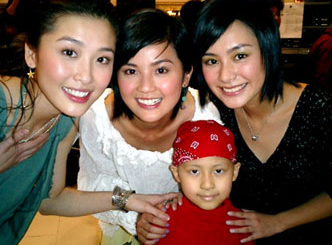 Chelsea is a student of the Shatin Junior School – one of the English School of Foundation in Hong Kong. She is a bubbly and cheerful little girl. Started walking at a tender age of 8.5 months and was able to put together a 100 pieces of jigsaw puzzle at the age of 2.

My wife and I have always encouraged her to look on the positive side of life, but little did we knew that it had become enormously helpful in the dark days ahead.

It all started in June 2002 at aged 6; she had felt persistent minor pain in her left leg. For a few months, we did not take it seriously thinking it was probably her energetic movement causing muscle ache. However, a visit to a general practitioner on a Saturday afternoon have shown it to be something more suspicious. The subsequent two weeks were the most anxious time we have ever experienced. The start of a long and arduous journey had just begun. She has been diagnosed with Osteosarcoma.

Throughout the whole time of in and out of hospitals, Chelsea has never once complaint why. The chemotheraphy has taken its effect and has caused her feeling nausea and vomit constantly, but after a while she had taken it all in her stride, never thought twice and just got on with her normal life. We had a red plastic bucket (one of her favorite toy on the beach) that became the most useful companion, which hardly left her side. She had made many friends in the hospital and was always proactive in playing and follow instructions from doctors and nurses. The only time of frustration or annoyance is when occasionally trainee doctors take several attempts in placing a needle in her arm, which caused undue and unwelcome pain.

In between of chemotheraphy, Chelsea has been in and out of the operating theatre on 5 occasions. The first major operation was in England during November 2002 when she had prosthesis inserted into her left leg in place of the infected bone. The operation and the subsequent recovery went so smooth that she was the proud and joy of every medical staff associated with her. Her recovery was also aided with close family support – most of her cousins were in England. With encouragement from everyone, she was walking within a week. Returning to Hong Kong for continuation of chemotheraphy, it was with great disappointment that local reoccurrence happened in 3 months later in February 2003. During these difficult times, we brought a MP3 for Chelsea and transfer most of her favorite songs (mostly from the canto-pop group -Twins) onto the machine where it kept Chelsea's mind at ease from the daunting decision of amputation. My wife and I were very reluctant at first, but it was Chelsea herself who made the decision of going through the operation because that life is very precious. 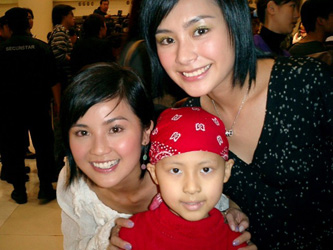 It was while waiting for the Hip Disarticulation operation due on 1st April that a sudden opportunity to meet her idols – the Twins. She was over joy with the thought of seeing them. She had been to their concert back in September 2002 and prior to that in July attended a show with her cousin Rachel just to see a glimpse of their favorite pin-ups. The 2 young "fans" had made a "message" card hoping to hand it to their idols back in July but were unsuccessful. Now, Chelsea has her dream coming true and not only can she submit the long awaited card but actual face to face contact. On the night on the meeting, Chelsea was more apprehensive than anytime of all of the operations put together. She tried so hard not to be nervous and to initial questions for conversation. So over-joy was her that she didn't get to sleep till 1.00am the following morning.

The meeting with "Twins" and the words of encouragement from the pairs have lifted Chelsea's confidence in facing the important and critical operation ahead. She has certainly accepted her fate and braved enough to face the challenges after the operation.

Whatever the future may hold for her, Chelsea is someone that would face it head on. As a father, I am extremely proud to have such a brave young girl as a daughter.